Fair4All Finance has been founded to support the financial wellbeing of the most vulnerable groups in society by increasing access to fair, affordable and appropriate financial products and services.

This week we were thrilled to speak at a parliamentary reception to celebrate the dormant assets scheme. The release of dormant assets for good causes is creating new opportunities to make a lasting difference in the lives of vulnerable people. Our Chair, Richard Collier-Keywood spoke about the challenge we are tackling and the impact we hope to have with the funds we’ve received from the scheme.

We were particularly pleased to be able to give a platform to two responsible lenders, giving them an opportunity to speak about their work and to also hear directly from their customers Tom and Alison.

Michael Sheen also joined us to speak about the urgent issue of financial inclusion, something he is both passionate and knowledgeable about as the founder of the End High Cost Credit Alliance. Michael drew attention to the fact that people who end up using high-cost credit, including pay-day loans and white-goods rent-to-own services, often become increasingly financially vulnerable as a result, with many going on to take out additional loans in order to pay back their original debt. 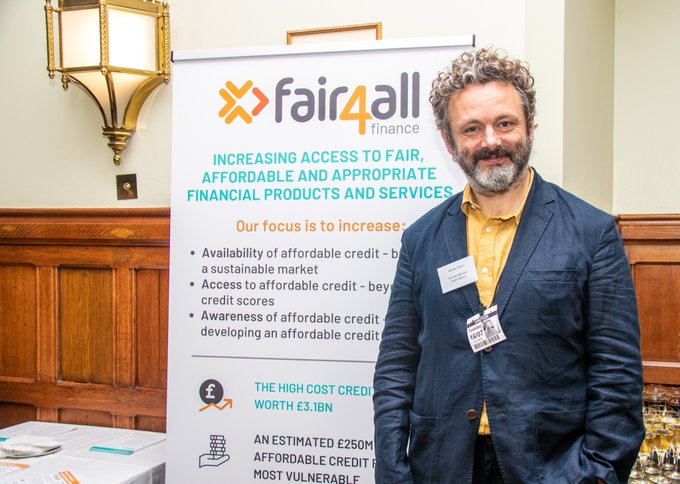 Youth Futures Foundation – who were launched out of the same strategy as Fair4All Finance and were awarded £90m to increase youth opportunities – were also in attendance to promote their work to help young people a long way from the labour market into meaningful employment.

We are encouraged by the support of all who attended and are grateful for the support of MPs, particularly Nigel Huddleston MP who hosted the event, John Glen, Economic Secretary to the Treasury and Mims Davies, Minister for Sport and Civil Society who both spoke passionately at the event.

Ukraine crisis – helping refugees access financial services
To help you support refugees who may approach your organisation for assistance, here's a list of requirements for each bank that can be used by refugees from all nations.
Building a fairer financial system
Read our responses to the Future Regulatory Framework Review and the consultation on a new Consumer Duty
JPMorgan Chase commits £1.2m to expand No Interest Loan Scheme pilot
The firm’s support will help expand loan scheme and pilot financial coaching support for people in vulnerable circumstances across the UK
International Women’s Day – who is left behind?
Our Head of Markets, Consumer Insights and Product Design, Lauren Peel, writes about the greater financial exclusion of women and what the financial services industry can do to help
Fair4All Finance announces new £435k investment in HEY credit union as part of plans to scale affordable lending capacity across the UK
Humber based credit union is the latest community finance organisation to benefit from the Affordable Credit Scale Up Programme
Sharing insights from our Covid-19 Resilience Fund
Independent evaluation of the Fund shows resilience of community finance sector and positive impact on people in vulnerable circumstances
Fair4All Finance CEO appointed to new Levelling Up Advisory Council
Sacha Romanovitch OBE to join new group providing expert advice on design and delivery of levelling up
All news
This site uses cookies: Find out more.